36,489 patients in hospital with Covid in new record high as critical care units operate at 152% of capacity

HOSPITALS have been overwhelmed with 36,489 patients admitted with Covid in a new record high – as critical care units are forced to operate at 152% of capacity to keep up with overwhelming demand.

Ambulances have again been stuck queueing to admit their patients as an NHS chief revealed hospitals are treating 50 per cent more Covid patients than at the peak of the first wave in April.

Read our coronavirus live blog for the latest news & updates 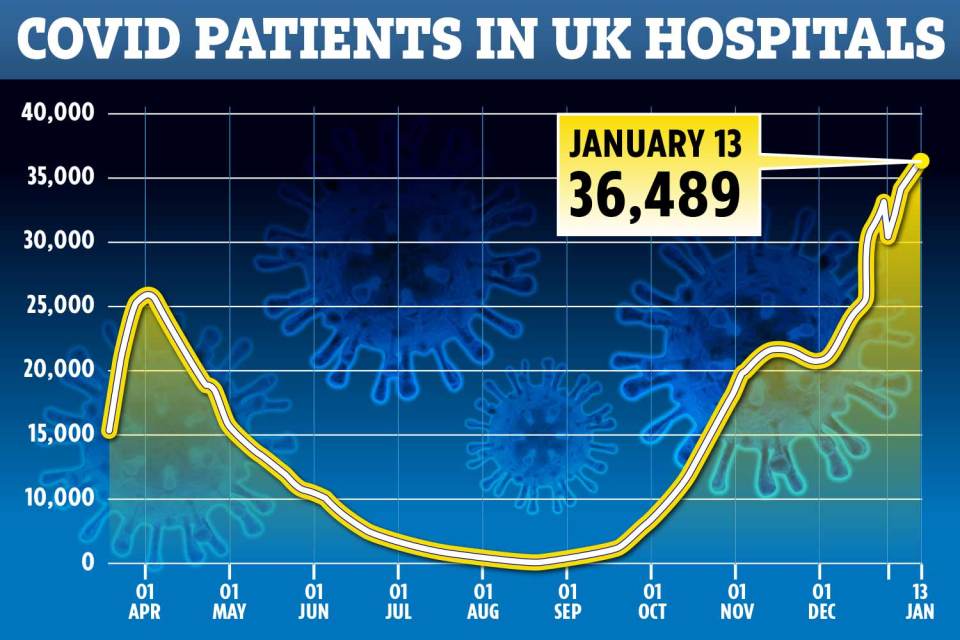 Photographs have revealed the pressure hospitals across the country are facing, with dozens seen waiting outside the Royal London Hospital.

And eight ambulances were seen parked up outside Barnet General Hospital – many of which have been drafted in from the East of England area to help with London’s surge in Covid cases.

Many regions have already declared major incidents as their hospitals struggle with the huge number of patients, with warnings that oxygen supplies are low and medics considering setting up war-style triage tents in car parks to treat the never-ending stream of Covid patients.

And the pressure on the NHS is not letting up with new figures revealing a total of 36,489 patients are currently hospitalised with Covid.

And while there was a slight drop in daily admissions from January 6 to January 10 – 3,967 compared to 3,571 – the numbers remain higher than the peak of the first week of the virus in April.

As of Tuesday this week, 3,496 Covid patients are on ventilation.

Meanwhile in Wales, health authorities have warned critical care is currently operating at 152% of normal capacity.

Chief executive of NHS Wales Dr Andrew Goodall said: “This is the highest level that we have seen during the second wave. This is almost our entire non-pandemic critical care capacity in use.”

And a medical director at Knowsley’s St Helens and Whiston Hospitals told the BBC that the hospital is admitting “a ward full of Covid patients every day” at the moment.

Ambulances have been forced to queue outside Barnet hospitals[/caption]

Overnight, it was reported that thousands of hospital patients are to be moved to hotels or their own homes to free up beds for Covid-19 patients.

Hospital chiefs in England will start discharging patients earlier than ever before to create “extra emergency contingency capacity”, senior sources have said.

Documents seen by The Guardian have also revealed that the NHS is also asking care homes to accept Covid patients directly from hospital without a recent negative test – as long as they have isolated for 14 days and do not show new symptoms.

This figure is the equivalent of 20 acute hospitals, he said.

He added: “The pressures are real and they are growing, and that is why … it is vital that we do all take the steps necessary to control the growth of infection.”

Meanwhile, police have been drafted in to drive London ambulances to help stretch resources.

Fire fighters have already been called in to help drive LAS vehicles as the service faces an almost 50 per cent rise in 999 calls – up to 8,000 compared to 5,500.

The UK today suffered its deadliest day of the pandemic after 1,564 more people lost their lives to the bug.

And the toll is hitting intensive care nurses hard as they face the fight on the frontlines.

Dr Caroline Walker, an NHS psychiatrist appearing on BBC Breakfast, was asked about the difficult situations staff were having to cope with, such as the number of patients dying.

Most read in Health News

Everything we know about new Brazilian Covid strain so far

Interactive map reveals how bad Covid is in YOUR local area

She said: “It’s extraordinary, and the sheer number of patients that are coming in now and the number of people dying, having to make really difficult decisions about withholding care.

“And IT (intensive treatment/therapy) nurses particularly struggling, as they’re the ones that are with patients in their moments before death, and they’re the bridge between the patient and the families, often.

“It’s extraordinary pressures they’re under at the moment.”

It’s OK to quit that resolution to diet: Science is on your side – Courier Post