Should I see my family at Christmas? Experts reveal what’s safe and what’s not

CHRISTMAS is on but the question still hanging over us all is should we see our family, even if it’s allowed?

Three households will be able to form an exclusive ‘bubble’ for five days over Christmas – thought to be between Christmas Eve and December 28.

Read our coronavirus live blog for the latest news & updates 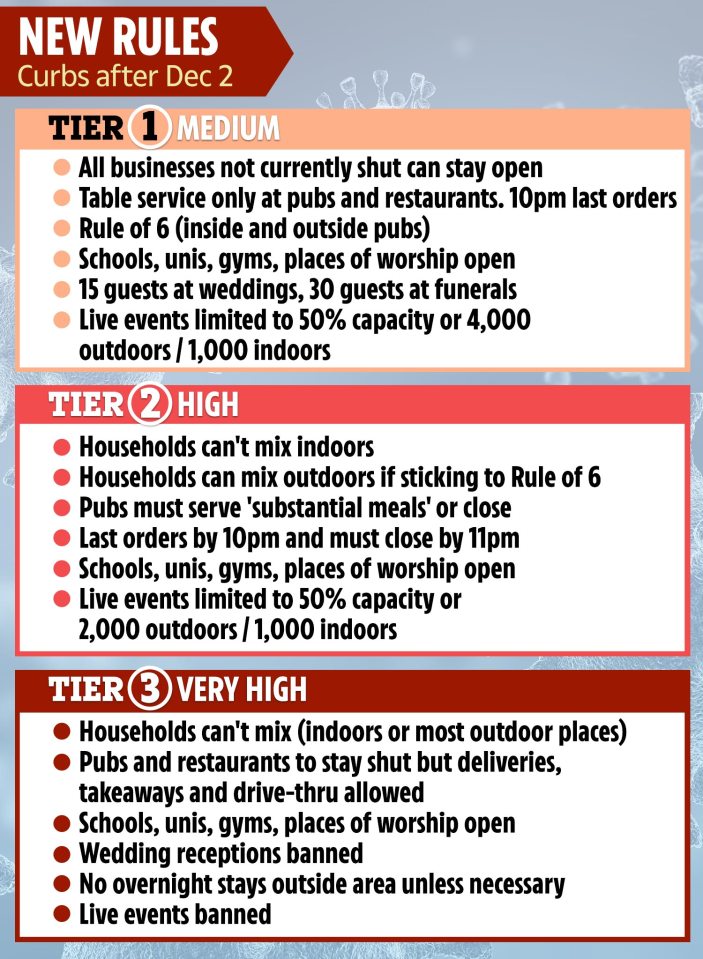 Michael Gove chaired a Cobra meeting at 4pm today to finalise plans to save the holidays, after Boris Johnson confirmed yesterday that families will be able to enjoy Christmas together.

Until then, England will go back into a tougher new tiered system from December 2 when the national lockdown ends.

Officials have said the public “will be advised to remain cautious” during the festive period, “and that wherever possible people should avoid travelling and minimise social contact”.

But what are the experts’ views on how to approach the festive season?

Should we relax the rules for five days?

The Government will relax the Covid restrictions to allow families a break at the end of “an incredibly difficult year”.

But scientists have warned a five-day relaxation in the rules could reverse any reductions in infection rates in the lead up to Christmas.

It could mean a potential 25-day period of tighter measures into January if the Government follows advice from Sage (Scientific Advisory Group for Emergencies).

For some, this decision could lead to their last Christmas

Dr Gabriel Scally, president of epidemiology and public health at Royal Society of Medicine, said: “Five days is excessive. There are not family gatherings that last five days, I think that would be too much.

“A long relaxation, particularly of the rules around alcohol and hospitality, I think that would be unhelpful and would feed the virus. We have to remember the levels of the virus are still very high, even though we are supposed to come out of lockdown next week.”

But he added: “I do think for those who want to do it, it will be good to have some loosening of the rules.”

Dr Nibedita Ray-Bennett, founding president of the Avoidable Deaths Network, said: “In my opinion, ‘the relaxation for five days’ is an emotive decision, not based on science.

“It is a decision of high risk with high impact. Sadly, the impact will be evident through the increase in the number of deaths.

“We will lose lives. For some, this decision could lead to their last Christmas.”

Dr Nibedita Ray-Bennett said: “We will lose lives. For some, this decision could lead to their last Christmas.”[/caption]

Is it safe to relax?

Dr Scally, a member of Independent Sage which today published a report with practical suggestions for a safe Christmas, said: “The first thing to remember is that it’s not compulsory.

“A lot of people have decided not to do anything this Christmas. They’re going to meet online and stay in touch that way because they feel so passionately about keeping their relatives safe.

“We’ve got to remember the big star rising in the east is the vaccines, so it’s a small sacrifice to make over the past few months.”

Lucy Yardley, professor of health psychology at the University of Bristol and a member of the Scientific Advisory Group for Emergencies (Sage), said some people have taken the good news about vaccines to think “Oh, it’s all over. I don’t have to take it seriously anymore.”

She told BBC Radio 4’s Today Programme: “[There is] still time to have another peak of infection that could kill many more people.

“So, actually it should be the other way around – we should think that ‘We’re so close, we’ve only got to keep doing it for a little bit longer’, and the worst possible Christmas present is to cause this infection to spread in our families.”

How can you make it less risky?

Professor Ray-Bennett, an associate professor in risk management at University of Leicester, said: ‘Through effective management of the Covid-19, I believe our vulnerable citizens can enjoy many more Christmas’ in our lives.’

If you chose to come together with family, Dr Scally said the most important thing to reduce the risk of the coronavirus spreading is ventilating the home.

“If you are meeting indoors, you need to make sure there is good airflow. It’s not just opening one window, it’s two either end of the house or one on the top and bottom of the house, and keeping doors open.

“You don’t need a gale, just movement of air so you’re not getting stale air.

Prof Yardley said: “At the moment, people don’t really realise that they need to do things in the home and that there are things they can do to make everybody safer if they do come together.”

She suggested taking the same precautions that pubs have to, including cleaning surfaces every hour.

HOW TO HAVE A SAFE CHRISTMAS

The Government will soon give guidance on how to celebrate Christmas safely. Experts have given an idea of what to expect:

Can dozens of people can get together for parties?

The Government will allow three households to come together over Christmas, but it’s not yet known if there will be a limit on the number of people allowed – or if kids will be exempt.

If not, it could allow for big gatherings.

“That is the worrying part, if numbers are too large and the space is too small,” Dr Scally said.

“It’s a function of three things – the numbers, space and what’s going on. If everyone is standing around talking face to face that’s problematic.

“One of the problems for us is that traditionally christmas gatherings are multi-generational. I think that will be the most dangerous thing.”

If you go to the pub then see family, that’s the most dangerous situation of all

Prof Yardley said: “When people come together with people they know well in their homes it’s a particularly risky situation because they let their guard down.

“They spend a lot of time with them and that’s actually when the infection is most likely to spread.”

Dr Scally said if people decide to have large gatherings, “they need to think about making them as safe as possible”.

But he suggested instead meeting outdoors for a Christmas walk, or if possible, in the garden while wrapped up warmly.

“Even though the government has dropped the two metre social distance rule, try to maintain that. It’s a very good way of reducing the risk,” Dr Scally said.

“The other thing to do is wear a mask because they add a lot of protection to both those wearing them and others; if everyone wears one, it’s a very good way of reducing the risk for all.”

Should we self-isolate for two weeks before seeing relatives?

Dr Scally said self-isolating before seeing relatives at Christmas was a “sensible and caring” thing to do.

He said: “Families have to have a discussion so everyone is comfortable with the arrangements. That means some may isolate for 10 days or 2 weeks before so they know they won’t pose a risk.”

Prof Yardley warned of the risks of celebrating the festive seasons at the pub with friends – if their tiered restrictions allow for it – before mixing with family.

She said: “Obviously, if you go to the pub then you go to see family members that you haven’t seen and stay with them for a couple of days, that’s the most dangerous situation of all.” 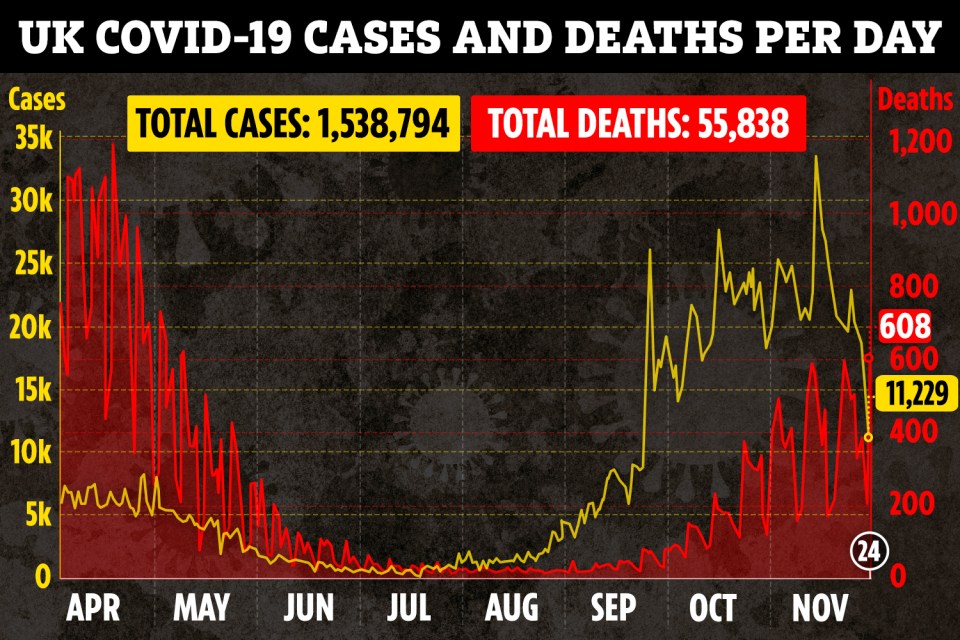 Can we sit at the same table and eat together?

Dr Scally said eating at the table with a group of people from outside your household was problematic for a number of reasons, and was one of the most risky things you can do this Christmas.

He said: “Not everyone has a house big enough for a big table to spread people out, so people are sitting close together.

“They are eating and not wearing a mask, and they may be drinking alcohol and talking, possibly loudly because there is music.”

Prof Yardley also warned against “sharing plates and cups and so on”.

Should I hug my grandparents?

We’ve been yearning to hug our loved ones for months.

But health chiefs have said to resist the urge. The Health Secretary Matt Hancock told Times Radio last week social distancing rules of “one metre plus” will remain in place over Christmas.

Asked if we can give our grandmas a cuddle over the holidays, Dr Scally said: “Give them a promissory note to be cashed in when people have been vaccinated.”

Is it safe to stay overnight?

Under the new tiers guidance set out by the Prime Minister last night, people in Tier 3 are not allowed to travel to other parts of the UK and stay the night.

Those in Tier 1 and 2 are encouraged to “avoid travel to or overnight stays in tier 3 areas” to limit the spread of the virus.

But at Christmas, that will change. There will be a relaxation of restrictions on overnight stays, and people will be allowed to travel freely between tiers to see family.

Given that officials in the UK’s four nations are working together, it’s expected people will be permitted to travel freely between countries.

Dr Scally said he does not think overnight stays are a problem, “provided the house is suitable and that’s possible to do to contain distancing, and keeping surfaces clean”.

Dr Scally said: “A lot of people are going to meet online… because they feel so passionately about keeping their relatives safe”[/caption]

Is it okay to see my family on Christmas day, and the in-laws on Boxing Day?

The Government has yet to clarify how household mixing will work, raising questions about whether limited households can “bubble” together for several days, or whether you can see different households on each day.

Dr Scally said either way, “the more people you see, the more networks you are connecting”.

“We should do as little mixing as possible,” he added.

How do I set rules in my house?

If you’re hosting people this Christmas, you may feel awkward telling people to abide by some rules.

Dr Scally said: “It’s about reaching agreement, not imposing their view of things on someone else.

“Masks is a good example – the benefit of masks comes from everyone wearing them, because the mask really is effective in stopping someone transmitting the virus.

“So saying to someone, I’d like you to come in, but only if you wear a mask, it’s working out how to say that in a non-threatening way.”

The expert also cautioned to be considerate, saying: “We’ve got to be very careful about older people and those with vulnerabilities, and there will be people of all ages with underlying health conditions.

“We must be respectful of that, and understand why people want mask wearing or social distancing observed if they have people round.”

Is it safe to invite someone who may be lonely?

Scientists at Independent Sage have said no-one should be alone this winter, despite the pandemic.

Most read in Health News

What tier will I be in? Hotspots that could enter Tier 3 when lockdown ends

Dr Scally, who is part of the group, said people should invite isolated people over for Christmas if it can be done safely.

He said: “We should be thinking about those who are isolated. Even if you’re knocking on their door to wave at them through the window.

“That neighbourliness is very important, and that’s what communities should be doing to look after those who can’t see families.”

It’s OK to quit that resolution to diet: Science is on your side – Courier Post